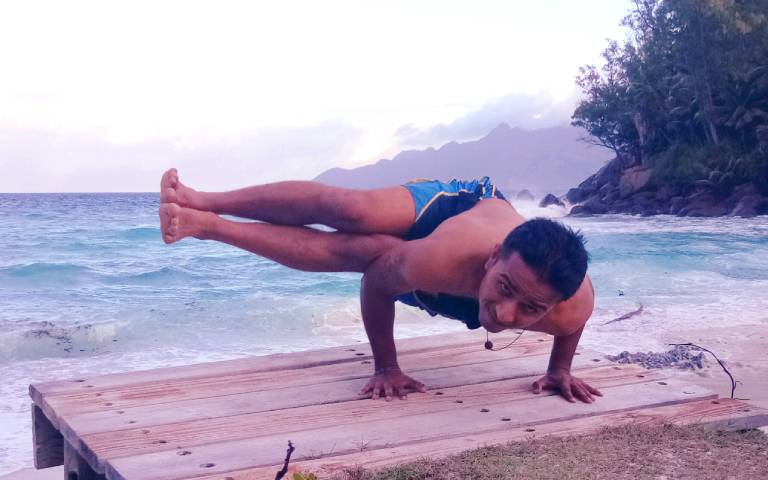 Astavakrasana, or the Eight-Angle pose, was named after a noble Yogi Ashtavakra. There is a magical inspiration after practicing Astavakrasana.

He was the son of king Kagola, who cursed him for having curves on his body when he was in his mother’s womb.

Ashtvakrasana is a balancing pose and comes under an advanced series of Hatha Yoga practices. This posture is excellent for awakening the Manipur chakra and helps people improve their concentration levels.

It would help if you practiced this asana after balancing the palms, which requires a lot of strength on the forearms and elbows. Before attempting it, we highly recommend practicing Bakasana and Chaturanga Dandasana.

How to practice Astavakrasana or Eight-Angle Pose?

Eight angle pose should be practiced in a yoga class after proper warm-up and finishing the primary series of Asanas.

There should be a lot of practice in wrist movements, shoulder rotation, elbow extensions, and arms stretching. The sequence of practicing Astavakrasana will be as follow: –

Benefits of Astavakrasana or Eight-Angle pose

The eight-Angle pose requires a lot of strength, resistance power, balancing, and flexibility. There are many benefits of Ashtvakrasana, and these are: –

Note: Eight-Angle pose is an advanced pose practiced in Yoga Therapy as an effective tool for recovering from back and shoulder injuries.