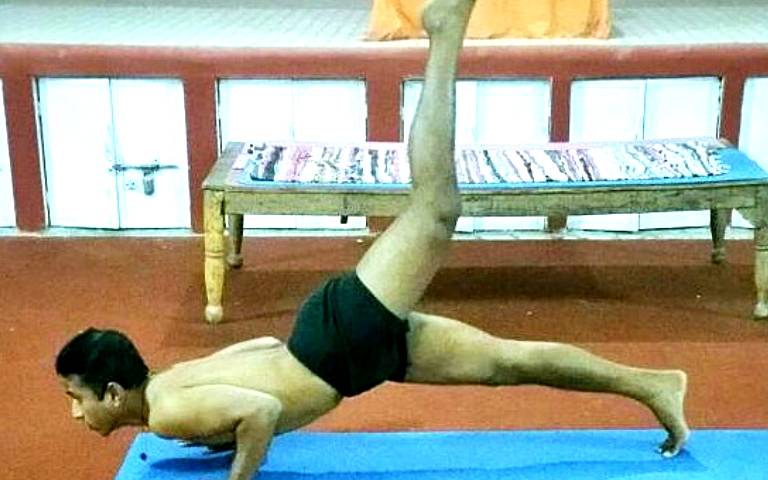 Chaturanga Dandasana or four-limbed staff pose is a momentous asana in the practice of Hatha Yoga and Ashtanga Yoga and Sun salutation series. In Sanskrit, Chatur means Four, Anga represents limbs and Danda is meant by staff. It resembles the spine of a human being.

It is pronounced as Chaturanga Dandasana “Cha-tur-anga- dandasana.”

Chaturanga Dandadasna or Four-Limbed staff pose is practiced in various flows of yoga practices. In ancient times Gurus were asking their disciples to hold and to stay in this pose for a long duration for developing strength, endurance, and boosting energy.

Especially in Surya Namaskara, Chaturanga is practiced so frequently. It is highly recommendable to practice Bakasana, Astavakrasana, or Eight-Angle pose before attempting Four-limbed staff pose. This is for attaining extreme balancing and coordination in body parts.

Chaturanga Dandasana is an intermediate-level series posture that requires a lot of practice. It is practiced a lot during the Sun Salutation series and that is the most important time for a beginner to concentrate on this posture. A beginner who has very less information about this pose may attain a good level of practicing Chaturanga after following these steps:-

Note: Chaturanga Dandasana has a fabulous work on activating Heart Chakra or the solar plexus channel. It is also helpful in activating Kundalini and has great work on the neutralization of Prana.

During our Yoga Teacher Training programs, we ask our students to be under the practice of Chaturanga for physical, mental, and emotional growth. In our Reiki and Yoga Therapy sessions, it supports them to recognize the benefits of holding Chaturanga for a specific duration of time.